‘Why those who offered cash rewards against Er. Rasheed’s head are running free’ 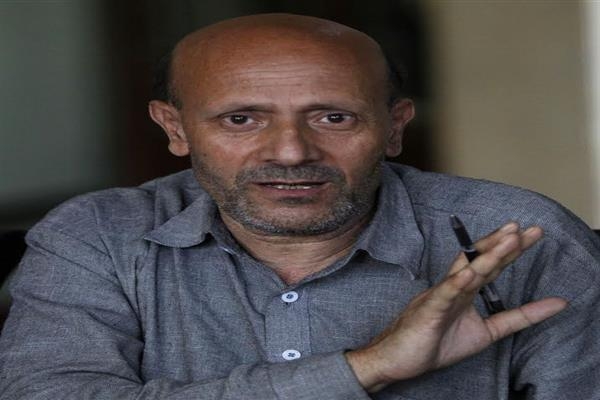 In a statement issued today party spokesman Sheeban Ashai said that we respect the views of all those who don’t agree with Er. Rasheed’s views on Maharaja but asking for head and tongue of Er. Rasheed and offering cash rewards to anyone who can fulfill their shameful desire is not only a shameful act but a serious offence.

“No one can distort the history. All self-styled Dogra saviors who were abusing Er. Rasheed on roads of Jammu with full patronage of communal forces and civil and police administration need not to forget that it was none other than Maharaja’s grandson and congress leader Vikram Aditya Singh who used derogatory remarks against martyrs of 13th July 1931. Before Vikram Singh abuses the martyrs or Congress spokesperson Ravinder Sharma raises slogans against Er. Rasheed on streets of Jammu, they need to answer that Ghulam Nabi Azad who was Chief Minister for three years and all his predecessors would praise the martyrs and pay floral tributes to them. Let Vikram Aditya Singh and other Congress leaders decide and explain on which side they stand. It hardly makes a difference what derogatory slogans these goons have raised but they need to be reminded that J&K is the only ill-fated place in the sub-continent where prostitution is not offence by the courtesy of Dogra rulers. Before indulging in mud-sliding can Vikram Singh, Congress leaders, NPP & so-called Dogra saviors tell masses why prostitution was legalized in J&K,” Ashai said.

“Few goons who are politically charged do not represent the Dogra community and people majority of Dogras understand that what Er. Rasheed has said was not for the reason that Hari Singh was a Dogra. He further said that if Hari Singh or any other Dogra Ruler has done anything good for the society, we are not so narrow minded that we will not give them credit for that, but it doesn’t mean that we should distort the harsh facts. Spokesman asked administration to tell masses if their response would have been similar had some Kashmiri or a Muslim used such derogatory language,” the spokesperson said.

“The party has lodged a formal complaint at Police Station Rajbagh asking lodging of FIR and initiating further action against those goons who are asking for head and tongue of Er. Rasheed and said that such useless threats and obnoxious language cannot stop us from telling the spade a spade,” Ashai added. (KNS)

Video Shows Teen Trying To Give Water To Covid+ Father, Stopped By Mother