My colleagues shall work untiringly both inside ,outside parliament for safeguarding Art 370, Art 35-A: Farooq Abdullah 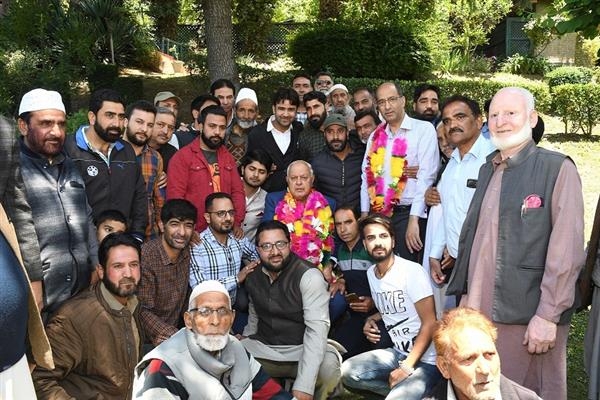 While addressing workers, party functionaries, Dr. Farooq said that the elections results in Srinagar reflect the mood of the people, who notwithstanding various vulnerabilities came out and voted for our party. “Inspite of the critical situation that most of the valley areas are beset with; people made it a point to cast their vote in favour of NC. I take this opportunity to express my gratitude to the people. The faith people placed in our party is humbling and it gives our party the energy to work harder to fulfill people’s aspirations. We have a mammoth task ahead of us, on one hand we have to protect the pluralistic ethos of the state, usher in an era of development and on the other hand we have to fight for the protection of the special status of our state.”

He further added, “I along with my other colleagues Muhammad Akbar Lone and Hasnain Masoodi shall work untiringly both inside and outside parliament for safeguarding Art 370, Art 35-A. The impressive victory would not have been possible but for the proactive role played by the workers. Now that people have done their bit it is now for us to rise up to the expectations of people and deliver on the undertakings that we made during the run up for the elections. I assure people that the party will leave no stone unturned to defend and protect the special position of the state at any cost.”

Party president while exuding confidence in workers, party functionaries said, “The biggest battle is ahead, the party rank and file, the workers have to maintain the momentum and ensure a strong mandate for the party in the upcoming assembly elections. Moreover we will deliver on the promise of giving regional autonomies to all the regions and sub regions of the state. Once in power the party shall immediately start the decentralization of powers to different remote areas of the state. We will put in all efforts for equitable development of the state. With Omar Abdullah in vanguard of the new government the party will materialize the ideals of Naya Kashmir.”

“We will take due care of all the minorities. As far as victory is concerned, it does not belong to an individual it belongs to the party. I take this opportunity to thank the people and workers in the Jammu and Ladakh division for abiding by the party directions. I congratulate each and every worker of the party in the far flung areas of the state for reposing their fate in the party. I assure all the people that party will undertake the development in all the remote areas on priority basis. Our agenda of development is progressive and inclusive. I assure everyone that once in power the party with Omar Abdullah in vanguard of the new government will take no time to give regional and sub regional autonomies to the far flung areas of the state. People have done their bit now it is for us to deliver on the promises the party has made in the run up for elections,” he added.

On the occasion Dr. Farooq was presented with certificate declaring him as successful candidate received on his behalf by chief election agent of the party president Showkat Ah Mir from returning officer – 2 Srinagar PC. (KNS)

We will now begin a new journey to build a new India: Modi