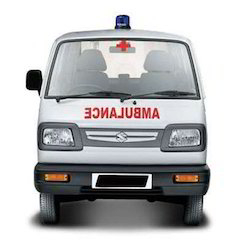 Pic Used for Representational purpose only

Anantnag, Apr 29: Believe it or not but it is true. A doctor seeks the permission from an ambulance driver first and then only refers any serious patient to Srinagar hospital. This happens only at Maternity & Child Care Hospital (MCCH) Anantnag.

The biggest hospital of Southern part of Valley has only one ambulance while no interest and seriousness are being shown to repair the two faulty ambulances.

“Its irony that a hospital where over 100 patients remain admitted in labor and surgical wards every night has only one ambulance for patients. Over 500 to 800 patients visit the hospital OPD every day for examination,” a medico told news agency Kashmir News Trust on condition of anonymity.

He said doctors can’t refer two serious patients at a time to Srinagar hospital. “A doctor has to call the ambulance driver first to ask him whether he is free or not. It’s not a good thing for patients,” he said.

Insiders said that two hospital ambulances, one in September last year and another this year in January developed some faults but these ambulances were never repaired.

“Only one ambulance remains available in the hospital. The hospital can’t refer a pregnant woman to Srinagar hospital at will but the doctor needs to call the ambulance driver first to ask him, when he will be available for the referral.”

They said even 108 free ambulance service is not available at MCCH but that ambulance has been stationed at Achabal Primary Health Centre.

One of the doctors said that Medical Superintendent MCCH tried his best to get the faulty ambulances repaired but GMC Anantnag is not serious about the issue.

The ambulances are lying dysfunctional much to sufferings of the serious patients.

“I would like to intimate your good-self that there are only three ambulances at M&CCH Anantnag. Out of three ambulances only one is on the road and the other two ambulances are off the road,” reads an official communiqué dispatched to Principal GMC from Medical Superintendent MCCH.

Medical Superintendent MCCH, Dr MS Andrabi told KNT that they had sent a requisition letter to the Principal GMC informing him about the matter. “I don’t know what GMC did or are doing at the moment,” he said.