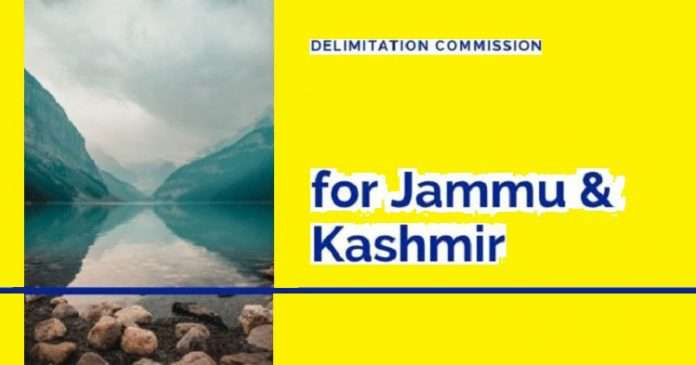 Jammu, Jul 08 (KNO): After two-day brainstorming feedback session with the political leaders from Kashmir, the Delimitation Commission Thursday arrived at Kishtwar district and met the leaders from various political parties there.

As per reports, 34 delegations from Kishtwar, 16 from Doda and 6 from Ramban representing political, non-political, social bodies, NGOs, BAR, youth associations and many others met the team and apprised them about their stand on the re-drawing boundaries of J&K’s Assembly seats.

Talking to media after meeting with the delimitation commission team, former minister and senior BJP leader Sunil Sharma, who led party’s 5-member team, said the terrain of erstwhile Doda district (Ramban, Doda and Kishtwar) is very difficult and population is very scattered, so it should not be compared with areas of plains.

“The area of erstwhile Doda should be given special treatment and delimitation should be across the districts,” he said.

Sharma further added that party (BJP) feels that census of 2011 is fudged and the existing structure of Assembly constituencies is nothing but a manipulated figure.

“Many villages of Jammu and Kashmir have shown abnormal increase of population, there were serious frauds in 2011 census so population should not be the sole criteria for re-mapping the new constituencies,” Sharma added.

Former MLC Naresh Gupta of Congress said that, “we submitted a memorandum and documentary evidence to the commission and apprised them that the area of Chenab valley is larger than Kashmir and Jammu but it has been discriminated during   1995 delimitation.”

Gupta said that they appealed the commission to create three more constituencies in all three district of erstwhile Doda.

“We appealed to create Bhleasa, Thathri and Gool-Sangaldham constituencies in all three administrative districts, adding presently the constituencies are unmanageable so it should be in people favor.”

Former minister G M Saroori said that delimitation will be held in 2026 in entire country but “we don’t know the reason for early delimitation in Jammu and Kashmir.”

He further added that if Nubra, Gurez could have constituencies then what is problem of giving constituency to Padder, Marvha-Dacchan. He said entire valley is undeveloped, so the commission should give equal representation to the Chenab Valley.

The Delimitation Commission arrived on July 6 at Srinagar and met a section of people including political leaders from the mainstream parties.

This is the maiden visit of the Commission and was planned in the backdrop of All-Party Meeting chaired by Prime Minister Narendra Modi at the national capital assuring assembly elections soon in Jammu and Kashmir.

The four-day visit of the Delimitation Commission on J&K started on July 6 and will conclude on July 9.

They said that besides meeting the various delegations, the Commission will also meet with DEOs of Kishtwar, Doda, Ramban.

On July 9, the Commission will meet with DEOs of Jammu, Samba, Kathua, Udhampur, Reasi, Rajouri and Poonch between 9:30 hours to 10:30 hours at Radisson Blu, Jammu.

Earlier in Kashmir, the political parties in one voice have demanded the restoration of statehood to Jammu and Kashmir and also pitched for Pre August 5, 2019 situation before holding Assembly elections—(KNO)

Developmental projects not completed in time this year, Says Shaheen