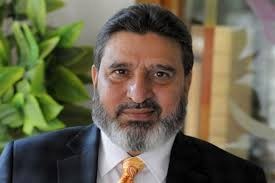 Says it could be ‘Aap Ki Party’, won’t remain confined to elite people, confabulations on, doors open for all’

Srinagar, Feb 13: The new political podium in Jammu and Kashmir is all set to announce its formation in next week in Srinagar, former minister Altaf Bukhari said on Thursday.

According to wire service—Kashmir News Observer (KNO), Bukhari who along with several former legislators and ministers started confabulations to structure a new party in Jammu and Kashmir following the abrogation of J&K’s special status (Article 370) and bifurcation of erstwhile State into two Union Territories—J&K and Ladakh.

Bukhari said that yes it is true that the confabulations are on and a new political party in Jammu and Kashmir will be announced soon. “We will be in Srinagar next week, probably on February 18 or 19. We have not decided any date to announce the party so far, but, factually we are trying to form the party within a month,” he said.

He said that the party doesn’t consist of only former legislators and ministers, but new faces will also be inducted in the podium. The former education minister said that it is a peoples’ party and there is no person in the party who have inherited politics.

“It is not elite club where only elite people will be invited. I even appeal the people from all walks of life to come forward and pull out the Jammu and Kashmir from morass,” he said, adding that “we have widespread support from all the regions.”

Asked whether any name has been decided for the new political party, he said it will not be an elite name; the name will be a common man’s name that common man associates with.

Meanwhile, sources told KNO that at least 30 leaders have joined hands so far who have been participating in confabulations regarding structuring of new political podium in Jammu and Kashmir.

They said that it will not take more than a few days to announce the formation of the party in Srinagar, adding that it is likely that the party will announce its formation next week. (KNO)